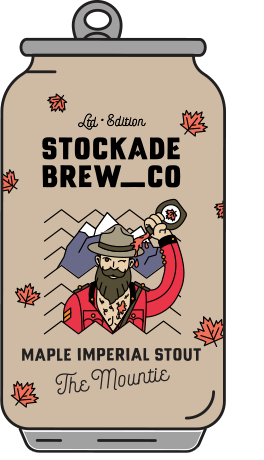 This big, rich stout is all about roasty raisins, chocolate, maple syrup and more maple syrup.

Brewed to be a big beer with rich roasted flavours, without being boozy. Maple syrup added post boil to achieve the distinct aroma and flavour.

Bold, strong and sweet. Really good Imperial stout that should definitely be drunk in moderation.

~ Matt Thomas
I really hate the fact that this beer is rare, its so flipping good and ive been craving it for so long, stop being a jack@ss and make some more. sincerely, everybody

~ Liam O'Brien
This is the true king of beers. Maybe the best I've tried

~ James Schlunke
First tried this at the Dark Nights beer night at the Union. Amongst a lot of good dark beers this was in a league of its own, it really is that good.

~ Robbo
First class beer. This along with Moon Dog's Captain Raisin Beard are the greatest beers I have ever drank. Please do another run of The Mountie guys. Please!

~ John Routledge
Absolutely stunning. One of the best stouts ever produced.

~ Mr stephen Salt
Maple Imperial Stout is one of the best beautifully crafted beers I have ever tasted. I absolutely it is wonderful flavours and highly recommend this beer to anyone who truly loves crafted beers 🍻

~ Craig
This beer is seriously like drinking liquified waffles doused in maple syrup, with chocolate coated raisins on top ?. It's deliciously roasty, and full-bodied, pours syrupy, with a decent thinly-laced tan head. A slight hint of cocoa and nice touch of nuttiness pair with the brown sugar and maple sweetness perfectly, with a just enough malt and bitterness to bring it all together ?. Although the maple lingers, a sweet fruitiness develops over the course of tasting, as the beer warms up.

~ Craftbeersofsydney
Coming in at 12% ABV, this was no slouch either. It poured equally brooding in the glass but had a deep and rich maple aroma. In the mouth the Mountie had a balanced and deep caramelised maple butter flavour with a punchy coffee finish. It also drank smoother than good pancake batter. I said a quiet ‘oh Canada!’ ?? and promptly ordered a follow-up serve.