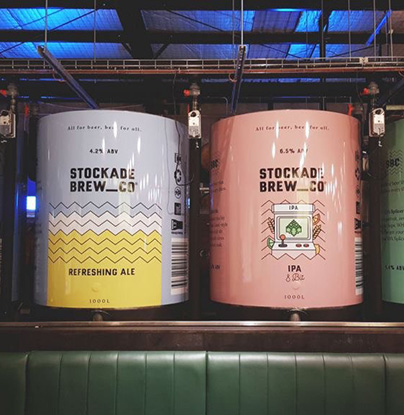 Stockade Brewing Co surprised me a bit as it seemed to have emerged out of nowhere.

Further research revealed that it evolved from the purchase of Australian Independent Brewers (AIB), which subsequently morphed into the contract craft beer brewing entity BrewPack, which then branched out into Macarthur Grange Brewery and eventually morphed into what is now known as Stockade Brew Co. On my never-ending quest for quality brews, the striking artwork and the much fabled about limited special batches caught my attention straight away and upon having a chance to sample it, exceeded the expectations I had. The merits of Stockade Brewing Co lie in their ability to channel the artisanal approach of a small brewery while pumping out quantities like a major player in the realm of beer retail.

With no shortage of public appreciation, Stockade’s accolade decorated portfolio includes four core beers: The excellent 8 Bit IPA, a Chop Shop pale ale, the Duel hoppy lager and the Hop Splicer XPA. The core range is complemented by experimental releases, the lion’s share of which I have yet to try myself and I cannot wait to get a hold of the Kentucky bourbon barrel-aged double IPA. Not usually being the most vocal advocate of XPA, the Hop Splicer hits the spot with its subtle nuances of grapefruit that pervade the dangerously drinkable brew. Things are taken up a notch via Mr Fruju, i.e. a New England IPA that puts a melange of hazy pineapple, pear and passionfruit flavours center stage and frames them with accentuated highlights of subdued bitterness. My favourite of the range, however, is Stockade’s 8 Bit IPA, which has become go-to as a boilermaker constituent with its hop heavy melange of well calibrated bitterness, citrussy notes and elongated finish that leaves one lusting for more of the malty caramel flavours.

The fact that some of Stockade Brewing’s emissions are exclusive to their tap room or can only by obtained directly from them should be incentive enough to make a deliberate effort to track them down.

The roof of your mouth will thank you for it.